Raquel Castro participated at the international conference Murmurans Mundus – Sonic Ecology and Beyond (3-5 Out 2019) with a talk entitled “Aural Identity, Neighbourhood and Sense of Community”. 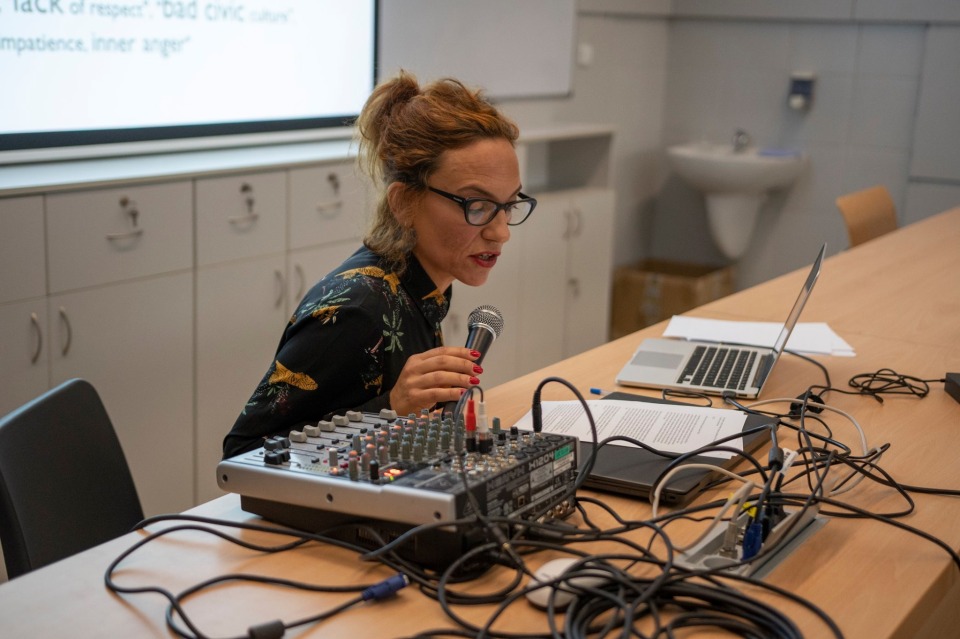 Central to the notion of a sound ecology is the role of sound in the definition of place – more than a notion of diffuse and abstract space. One of its goals is to document this role and determine the daily rhythms of a community. What defines an acoustic community is the existence of soundmarks. The boundary of each community is defined precisely by the limits drawn by the acoustic horizon of these unique sounds. When noise is so intense that obliterates all the soundmarks, it prevents the exchange of words and does not create singular identity but solitary individualism, we are facing a non-place.

Each city must be structured and organized for its inhabitants, but these are permanently removed from the decision-making process. In the last months, hundreds of lisboners have decided to voice their protests and a group of citizens was formed around the fundamental idea of having right to a sustainable soundscape, to the public space and to a collective identity.

The historic or typical neighborhoods, associated with other distinctive elements of Lisbon’s urbanity, such as rugged topography, proximity to the river, fado or popular festivities, symbolize a local history and a very own urban culture, thus constituting an important identity of Lisbon. In Lisbon, more than 100 places can be generically seen as neighborhoods and this is a distinctive mark of the city itself. But there are different scales in the sense of identity of communities that inhabit these neighborhoods. Neighborhoods are often associated with socio-economic categories, childhood memories, a spatial construction that accompanies us throughout our lives. Often this connection is forced, as a result of gentrification, real estate speculation or job opportunities.

A city cannot be an object of cultural consumption for tourists, the city is built every day by those who live in it, work and create their affective networks, it is for them that the city has to be designed and thought in human terms.

Drawing from a qualititive analysis in two neighboorhoods of Lisbon, Raquel Castro presented an empirical study based on a research that involved the application of questionnaires and interviews, trying to test the hypothesis that the perception of sound environment is a relevant factor in the appreciation of a given urban space and has an emotional impact on our sense of place and belonging.

On the other hand, the paper pointed out different strategies for a new urbanist thinking that approaches sound as a resource, and not as a problem. Sound maps – from the example of the Lisbon SoundMap – are one of the tools that, when drawn up in the early and exploratory phases of the planning process, can help map future scenarios and anticipate change, since they have the ability to gather all available information about the acoustic environment and how it is received, allowing a generic description of its holistic perception. Sound art was also referred as a tool for new understandings about the contemporary soundscape, for its capacity to confront the  listener with his own listening attitudes.